I can't say that I didn't make any progress this year. It's slow and somewhat steady, but it's progress nonetheless. Of course in my mind, I want more. I'm hungry for that explosive progress that's noticeable and will blow me away. I can want more, but I will need to do more.

I covered a bunch of milestones I achieved earlier in 2018 here. To continue from there, here is what else I've done up until now: 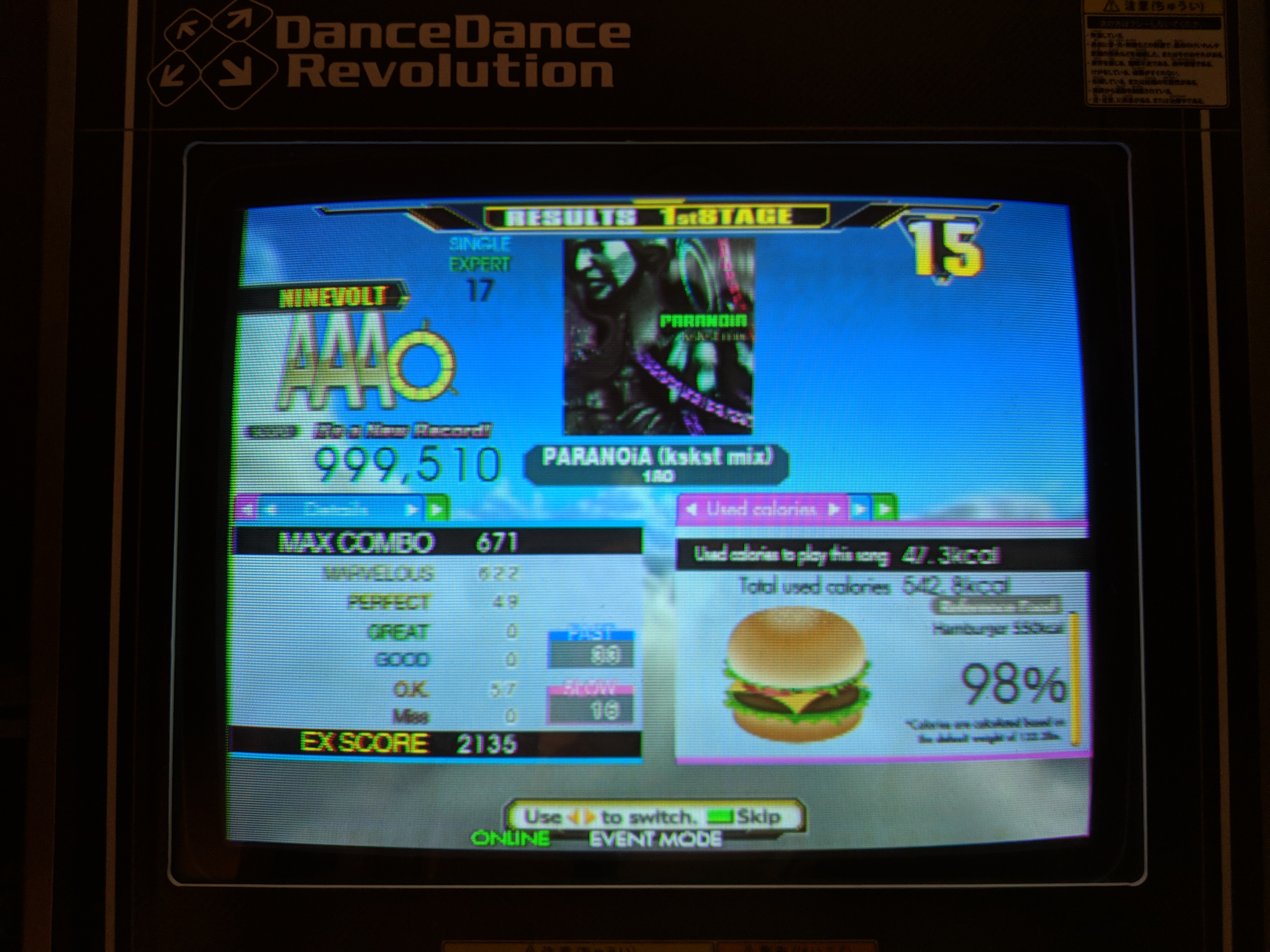 PARANOiA (kskst mix) was the first level 17 chart that I thought was PFC-able back when it came out on DDR X3 vs 2ndMIX. I wasn't as consistent or close enough to getting it back then when my best was something around 8 Greats and change, but I believed that with enough time I could do it. Fast forward to 2018 and getting the game running on my DDR machine, I gave it a few shots as I was playing through all the exclusives we didn't get in the North American release of DDR A. Switching between using Mirror and the normal chart, I eventually got the PFC on normal as my second level 17 PFC! I clapped my hands so hard afterwards that it hurt, but I was feeling hype overall. Of course it's not "official", but it shows that I'm able to do it. 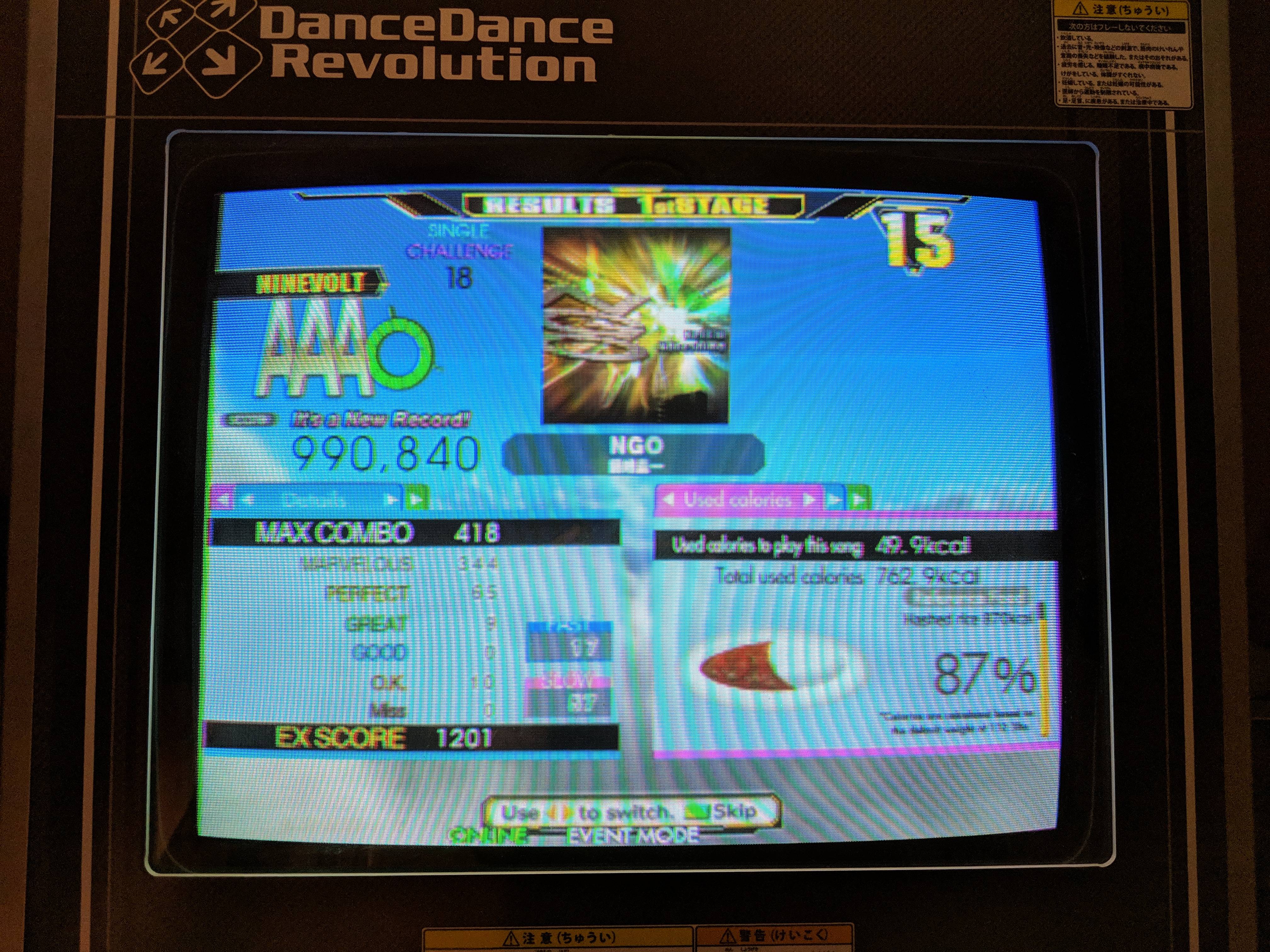 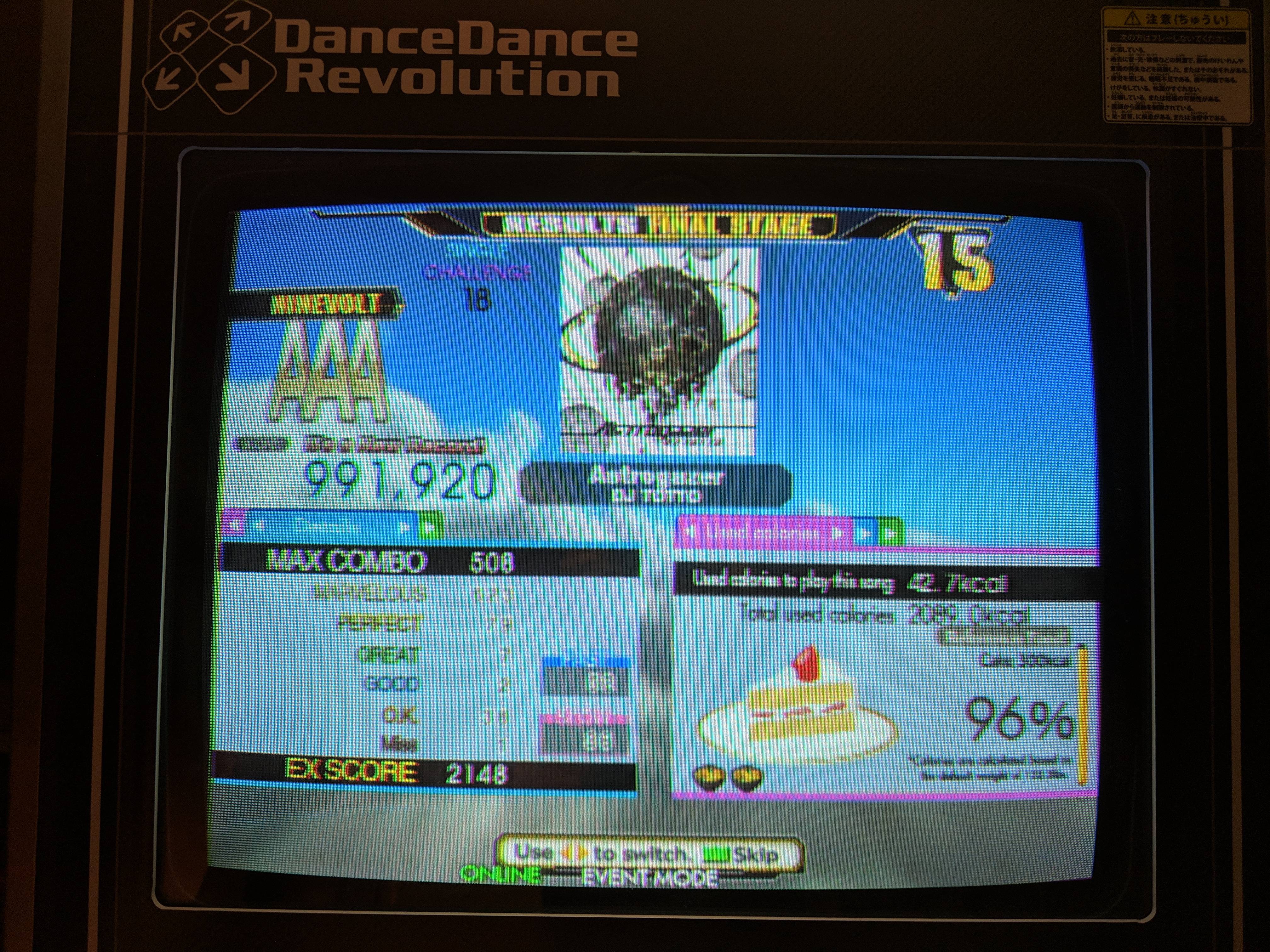 NGO S-Challenge and Astrogazer S-Challenge were level 18 AAA #3 and #4 respectively. Again, done off-network, but proving to myself that with enough grinding and taking some time to figure things out, I'm capable of getting scores like these. NGO Challenge also happens to not only be my 3rd level 18 Full Combo, it's my first level 18 Great Full Combo. My first, second, and fourth 18 FC's were 冥 S-CHALLENGE, Fascination MAXX S-CHALLENGE, and Astrogazer S-CHALLENGE respectively as shown below. This was all done within the month of November 2018. 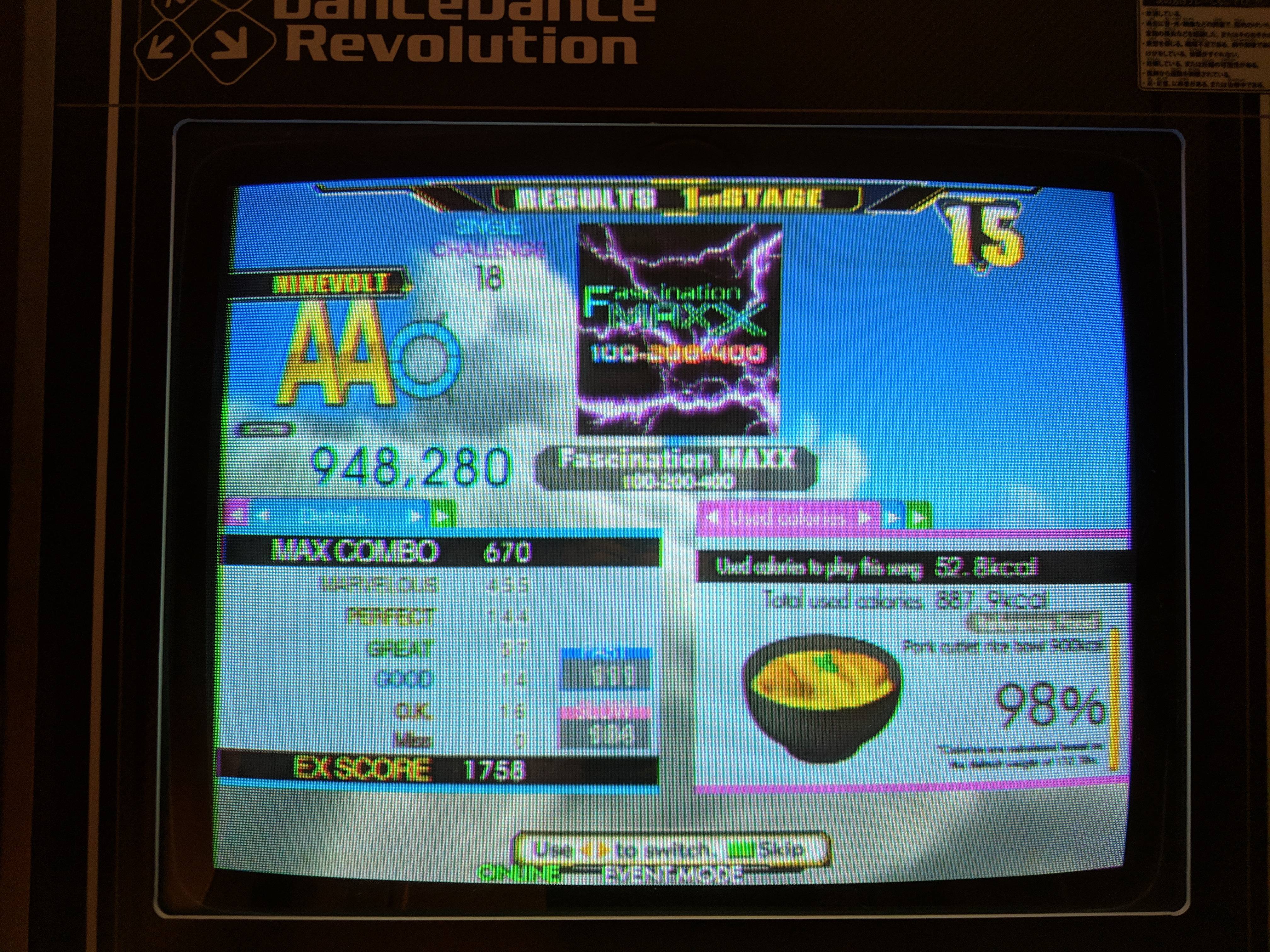 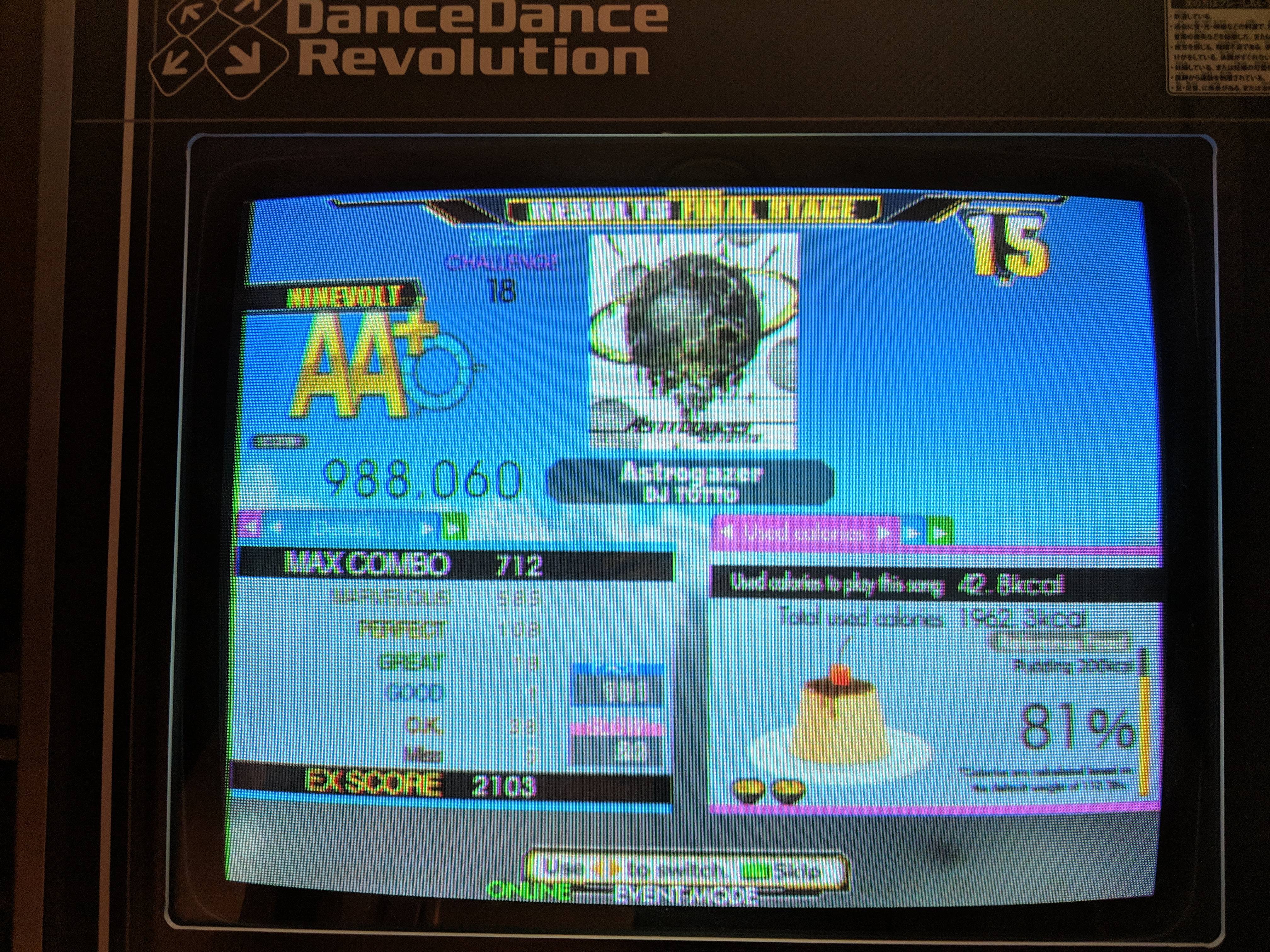 The one that surprised me the most was Fascination MAXX, because I was only aiming to get above a 950k score and when I did, I wanted to see if I could increase it further. Instead within a try or two, I sacrificed much of my timing just to get a Good Full Combo, and it surprised me so much because I know how complicated the chart is and reading slow is not my forte at all. NGO and Astrogazer happened just from grinding the charts so many times in a row going for the AAA.

This was basically a win for me knowing how far above everyone Chris and Matt are in skill. Fighting through the losers bracket after losing to Chris in Round 5, then having to face Pacrob who is a rapidly rising killer in the DDR competitive scene, the champion of The Big Deal 2, and managing to somehow beat him to face Matt in Losers Finals, I was in disbelief that I was able to make it that far with so many other killers left in the bracket. It was a shining moment to be standing there in the top 3 of the tournament among two of the most top of the tier players in the world.

FINAL final update
Managed to keep US #43, bumped down to Worldwide #137 due to other players squeezing in before the official closing time#8thKAC pic.twitter.com/612vU4CZl9

To be short, just like the qualifying period, this year was tough. The biggest trade-off with being able to play any of the KAC songs regardless of set or order was a drastic difficulty bump to the overall qualifier song list, throwing in PARANOiA Revolution into the mix as the most difficult and pivotal song to play.

I ended up placing #43 in North America and #137 (tied with OOOSH from Asia region) Worldwide. My goal was to at least break 11,000 total EX, but fell short with 10,808. My scores for Catch Our Fire, Emera, and First Time were pretty solid, but my Neutrino, Cosy Catastrophe, and PARANOiA Revolution scores were too weak and kept me down. It was a rough time since I was recovering from being sick after Raj of the Garage 5 with only a week left to improve my scores. At least I was able to come out of this event with three new level 18 AA+ scores, all significant improvements from what I had at the start of the event.

Somehow I had relapsed into getting sick again just as I was about to fully recover from being sick before. I didn't have much time to grind out a decent qualifier score nor did I have any time put in to practice DDR X3 timing. I was doing fine throughout most of the Winners Bracket, but some poor card draw veto and protect decisions and poor performance cost me both my Winners and Losers Finals matches. It was a mildly sour experience. Not that I believe my opponents are easy wins for me, they're both amazing players, but I do believe I'm more than capable of beating them in my matches. At that time, it just wasn't in my favor. Between fighting to breathe with a bad cold, not feeling warmed up enough to play my finals matches and not making smart decisions for the sets, it felt like total misery. Even with the losses, I still took 3rd place, and it was a humbling experience.

If there's anything I've learned from keeping track of my progress on this blog, it's that I'm very bad at following my own set specific goals. I get distracted too easily. Whether it's chasing for a specific score outside of my scope, or grinding for scores for another event, or doing literally anything else, it's extremely difficult to stay on track. Instead, I'll stick to one broad goal. And that is to get better at everything in general. Work towards the ability to perform every chart in DDR, especially everything above a 17, without feeling any sort of fatigue. There has to be something behind the madness with Matt grinding 888 Challenge and Chris grinding EGOISM 440 Challenge repeatedly with the same consistency, and it may be as simple as not getting tired. With fatigue, comes loss of focus and loss of consistency with technique. Like how I'm at the point where I can play 13s and 14s cold and repeatedly without feeling tired, I want to be able to do that for the highest level charts.

With very few exceptions, no ddr song should make you tired for more than like the duration of the results screen

With ECFA 2019 and the LIFE4 challenges coming next month (in the next couple of days), I'm hoping that these events can help push me into becoming an overall more powerful player.

Introducing the LIFE4 Ranking System! A challenge-driven progression system for DDR players! Details to come in the near future! pic.twitter.com/0Bq8YCJRws